In the post about Coronovirus we mentioned that oxygen is pretty important stuff and that if there is any reason you can’t get enough of it you could be in trouble. But have you ever stopped to think why oxygen is so important? What does it actually do that makes it so very very hard to live without?

In order to answer this seemingly simple question we have to think small. Really small. Right down to what is going on in our cells all of the time. We often think of glucose (and other sugars) as the energy source we need, but is that really the case?

Well yes and no. Without sugars we wouldn’t have any energy, but the actual batteries that power us are molecules called ATP (or adenosine triphosphate for long) that are formed from the breakdown and subsequent manipulation of glucose.

So where does oxygen come into all of this. The key is that in order to convert glucose into as many ATP molecules (and as much usable energy as possible) we need oxygen. At the very basics, without oxygen one molecule of glucose can be converted into two molecules of ATP (and two of lactic acid), yet with oxygen we get a massive 19 times more: 38 ATP.

So just how does this miracle occur? One of the most highly effective producers of energy there is. Just what does the oxygen do to help make this happen?

Step 1 – Glycolysis (with or without oxygen)

All of this magic happens in our cells. The first step – glycolysis – we can do without oxygen and occurs in the cytoplasm – the thick solution that fills most cells. This is where glucose is broken down (“lysed”) into two new molecules, pyruvate and lactic acid and two molecules of ATP.

The most important parts of this ATP production take place in the mitochodrion of the cell. First, the pyruvate made during glycolysis is converted into Acetyl CoA (by the removal of CO2 and the combination of that acetyl group with coenzyme A) . Then via a series of clever reactions NAD+ is converted to NADH and FAD is converted to FADH2 (Nicotinamide adenine dinucleotide and Falvin adenine dinucleotide as you didn’t ask). Are all of these chemical names important? Well, maybe if you’re studying A level Biology or for a degree in science (but even then I’m not sure). At the end of Step 2 we now have two more ATP and a bunch of FADH2 and NADH (which we need for the final part).

This is the really clever bit. The main thing we have to achieve is the formation of the covalent bond between the second and third phosphate groups as this is where all the energy is stored and released.

During this step (still in the mitochodrion), electrons are passed down this chain and ADP is converted to the energy storing ATP. At the end of the chain there has to be oxygen to accept the electrons that have been passed down, or it simply cannot function and ATP will not be formed.

So why is oxygen so important?

Without oxygen we cannot make enough ATP batteries for our cells to function. ATP is needed for pretty much everything and without it (and therefore oxygen) we’ll simply be unable to survive.

So, when you’re next asked why Coronovirus can be so dangerous you can now answer “well, it may lead to a reduction of the amount of ATP we can produce and that’s really, really bad”.

Addendum – Although theoretically there are 38 ATP formed for each glucose molecule in aerobic (with oxygen) respiration this is only under ideal circumstances. There are likely some ATP used up in the process and the actual number may be more like 25, but hey, it’s still way more than the number formed without oxygen.

Dr Iain Beardsell. MBChB, DipIMC (RCS Ed), FRCEM is a Consultant in Emergency Medicine at University Hospital Southampton and a Consultant in Pre Hospital Emergency Medicine. Iain qualified in 1998 and over the past 20 years has trained and practiced medicine in major teaching hospitals both in the UK and overseas. He has been a consultant at University Hospital Southampton for the past ten years, including a three year term as the unit’s Clinical Director. UHS is the main Major Trauma Centre for the South Coast region of England as well as the eighth largest hospital in the UK. Iain is also a highly regarded advisor to television medical dramas, including Casualty and Good Karma Hospital. An acclaimed speaker, Iain has spoken at international conferences in Australia, Ireland, Austria and Germany as well as across the UK. As the father of three boys he is passionate about instilling a love of science and promoting careers in healthcare. You will find him on twitter as @docib

This site uses Akismet to reduce spam. Learn how your comment data is processed. 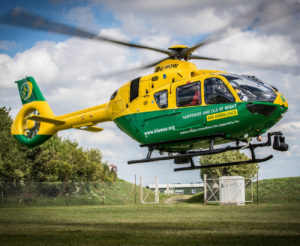